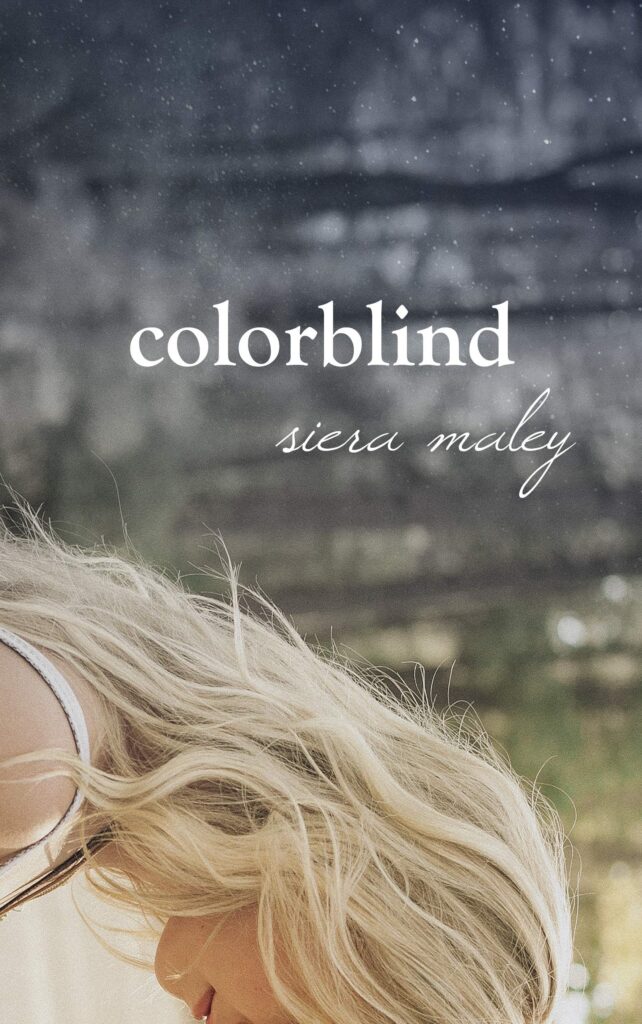 Harper has a secret… and it’s not that she likes girls. She has a special gift: she can see how old other people will be when they die. Nothing she does changes this number, and that becomes especially clear when her mother is killed in a car crash. With only one other person in the world who knows about and shares her powers, Harper is determined to keep her distance from everyone.

Then she falls for Chloe… whose number is 16. That means Chloe doesn’t have twelve months to live. She doesn’t even have six. She is going to be dead by the end of the summer, unless Harper can find a way to stop it.

Colorblind is an easy-to-read, light-hearted lesbian love story with a despondent undertone that makes for a truly unique reading experience.

Siera Maley really had me feeling some type of way while reading through Colorblind, which essentially revolves around the main characters, Harper and Chloe. Now, this being my very first official book review, I wanted to read and write about a book with just enough intrigue to give your typical teenage romance story a leg up, and I think Maley successfully achieved that. I will certainly be reading and reviewing some of her other works in the future.

Harper is gifted and can see the age of death on a person’s forehead, and throughout the entire story, she never lets you forget. I mean, how could she? It’s everywhere she looks. This plot point continuously circulates through Harper’s thoughts because the book is written in first-person, which then forced me to think about what human life is truly about and if there really is any point to it all. So, in other words, lots of time for self-reflection. Did I feel like there were religious themes? Yes. Did I think they were a prominent part of the storytelling? No.

Aside from the heaviness of the existential and inevitable, everything else in this book reminds me of the happy romance stories I wished to find on bookshelves as a teenager. It’s everything you want, really. Two girls meet during summer vacation, they both clearly like each other, and the rest is tension-filled history. Or, what us writer’s like to call a “slow burn”. My only complaint is that I wished we could’ve gotten a few more intimate scenes between the two girls, because you know, that’s what we live for.

Now, I predicted the ending of the book, but ONLY four pages before, which I consider a great accomplishment because as a writer, it’s easy for me to see where the story is heading by the middle. Maley did a really great job and had me hanging on until the very (near) end.

All-in-all, I would recommend Colorblind to people who are looking for a simple read featuring two lesbian-identifying main characters in their teens with just a dash of underlying angst.

You can purchase Colorblind here.