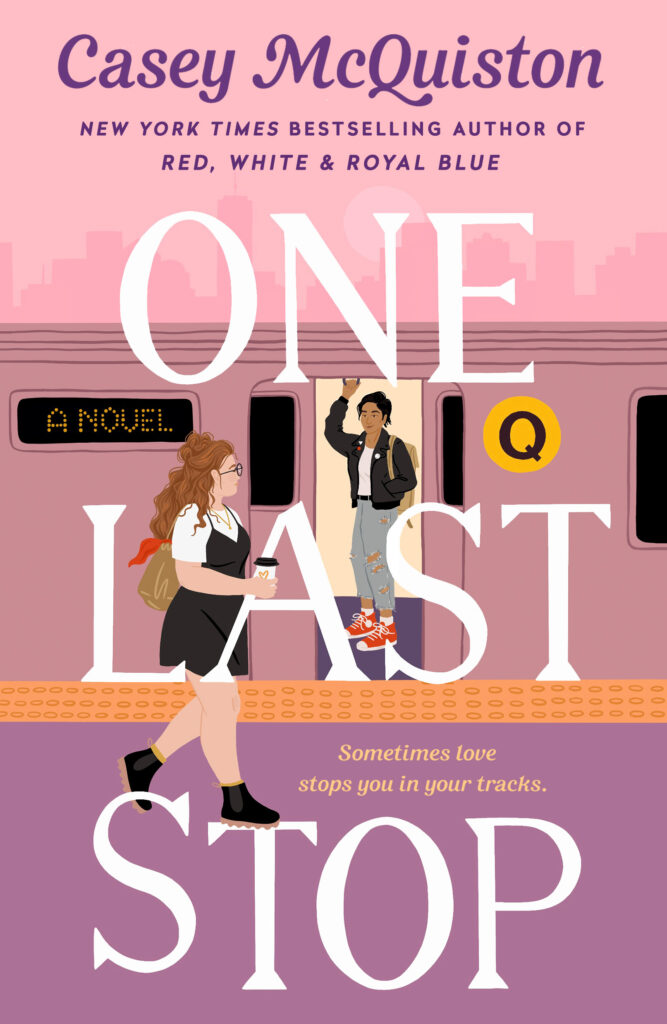 For cynical twenty-three-year-old August, moving to New York City is supposed to prove her right: that things like magic and cinematic love stories don’t exist, and the
only smart way to go through life is alone. She can’t imagine how waiting tables at a 24-hour pancake diner and moving in with too many weird roommates could possibly change that. And there’s certainly no chance of her subway commute being anything more than a daily trudge through boredom and electrical failures.

But then, there’s this gorgeous girl on the train.

Jane. Dazzling, charming, mysterious, impossible Jane. Jane with her rough edges and swoopy hair and soft smile, showing up in a leather jacket to save August’s day when she needed it most. August’s subway crush becomes the best part of her day, but pretty soon, she discovers there’s one big problem: Jane doesn’t just look like an old school punk rocker. She’s literally displaced in time from the 1970s, and August is going to have to use everything she tried to leave in her own past to help her. Maybe it’s time to start believing in some things, after all.

Casey McQuiston’s One Last Stop was my first sapphic read of June 2021 and it surely didn’t disappoint. McQuiston is the author of Red, White and Royal Blue, another highly esteemed queer novel that was an immediate hit, so of course when I heard about One Last Stop’s release, I had to read it. Especially with all the hype on Book Tok.

There are a lot of great things about the book, the fun,
magic-esque mysterious Jane, who’s from the 70s and stuck on the subway. August’s interesting background, and also being from Louisiana (yay for some home state rep!) and her interestingly difficult relationship with her mother. Niko, Myla, Wes and Isaiah who just really make you love all of them immediately off the bat at how distinctly human and real they all are. Honestly, it was a fun
read, despite me believing it was about 20K words too long, but that’s just a personal preference and shouldn’t take away from someone else’s experience reading it.

And on top of all that, there’s a lot of queer rep and some history
to go along with it.

Of course, I do judge sapphic romance books differently than
others that may feature different gender romantic dynamics because I am a lesbian, so there were a few things I wanted to see more of between August and Jane. I did love the characters individually, I think they had great scene interactions, I just wanted to feel the tension between them more. There were a
few sex scenes that would’ve been more impactful and enjoyable, in my opinion, had McQuiston focused more on the tension between the two beforehand. I do think McQuiston’s writing style is more along the lines of telling rather than
showing, and that’s totally okay, it’s just not my personal preference. I wanted more touches, more glances, more banter through dialogue.

I also think McQuiston could’ve done better when writing
about Jane’s fears of sexual and racial discrimination. Jane, who was a young, butch, Asian-American lesbian in the 70s, expresses her fear of how people will react or have reacted in the past to her, and there’s a comment August makes
claiming that “people aren’t like that anymore.”

In 2020 alone, we saw that people are, in fact, still like that, and it felt disingenuous to Augusts’ character and a bit insensitive.
There were a lot of great things about the story, and I enjoyed reading One Last Stop, but I don’t think all the different aspects in this story came together the way that I wished and expected.

Still, it was a good book that I’ll certainly recommend to people.