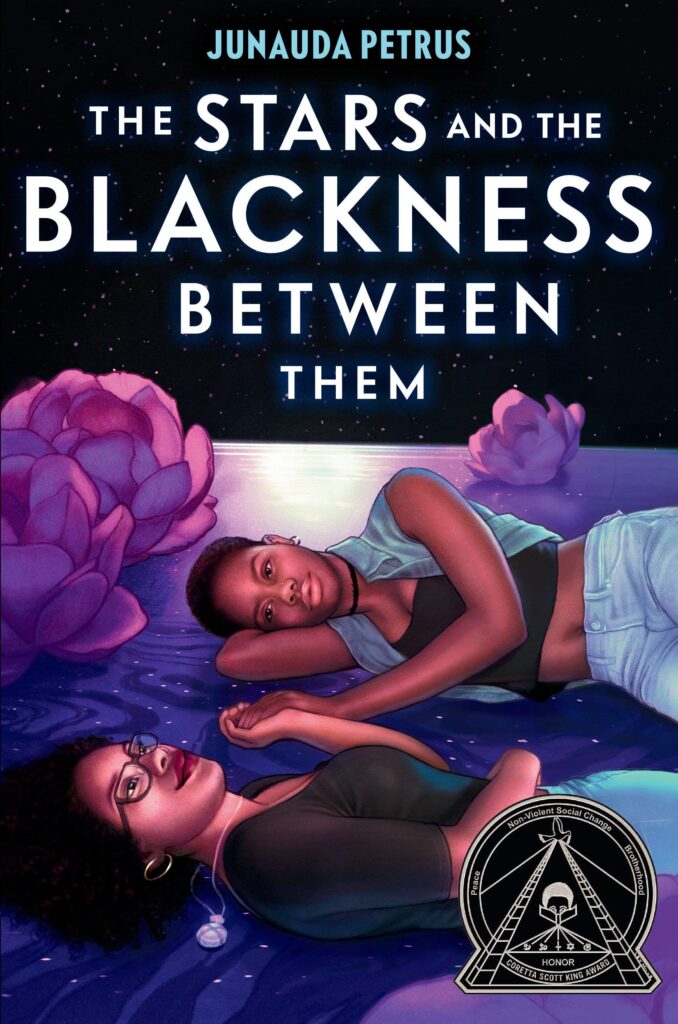 “Told in two distinct and irresistible voices, Junauda Petrus’s bold and lyrical debut is the story of two black girls from very different backgrounds finding love and happiness in a world that seems determined to deny them both.”

Port of Spain, Trinidad. Sixteen-year-old Audre is despondent, having just found out she’s going to be sent to live in America with her father because her strictly religious mother caught her with her secret girlfriend, the pastor’s daughter. Audre’s grandmother Queenie (a former dancer who drives a white convertible Cadillac and who has a few secrets of her own) tries to reassure her granddaughter that she won’t lose her roots, not even in some place called Minneapolis. “America have dey spirits too, believe me,” she tells Audre.

Minneapolis, USA. Sixteen-year-old Mabel is lying on her bed, staring at the ceiling and trying to figure out why she feels the way she feels–about her ex Terrell, about her girl Jada and that moment they had in the woods, and about the vague feeling
of illness that’s plagued her all summer. Mabel’s reverie is cut short when her father announces that his best friend and his
just-arrived-from-Trinidad daughter are coming for dinner.

Mabel quickly falls hard for Audre and is determined to take care of her as she tries to navigate an American high school. But their romance takes a turn when test results reveal exactly why Mabel has been feeling low-key sick all summer and suddenly it’s Audre who is caring for Mabel as she faces a deeply uncertain future.

Junauda Petrus’s debut brilliantly captures the distinctly lush and lyrical voices of Mabel and Audre as they conjure a love that is stronger than hatred, prison, and death and as vast as the blackness between the stars.

The Stars and the Blackness Between Them, had me laughing, smiling, and crying the entire way through. This book is certainly a lot denser than other Young Adult novels I’ve read, but Petrus does so to immerse you in the world of Audre and Mabel. With so many layers, it’s hard to know where to start for this review, especially without giving any spoilers

At first, I was afraid I wouldn’t be able to complete this book in the allotted time, but as I continued reading, I found I couldn’t stop. This book showcases so many different ways of life, beliefs, hardships, types of love… God, I could go on forever about it. It will definitely be a book I revisit in the future.

The book opens with Audre, who is living in Trinidad when we
meet her and is grieving being shipped off to the States because her mother caught her being romantically involved with another girl from their church. This obviously sends Audre into a depressive spiral because she’s ripped away from her family and the first girl she’s ever loved. As someone who experienced
something similar in my adolescent years with my first girlfriend, Audre’s pain pulls at old wounds.

When the old friends meet in Minneapolis at Mabel’s house,
the chemistry between them is there. Of course, both girls are going through their own type of heartbreak or sexual discovery, so their flame is a slow burn. The relationship between Mabel and Audre is the sweetest, realest, and most heartbreaking love once Mabel receives her medical diagnoses. There’s so
much lovely black queer love in this book, and it’s ridiculously sweet.

But as I said, there are so many layers that I could spend days talking about, like the spiritual experience it takes you on, the
activism, astrology, herbal healing, the pain of loss and the family we find in our queer communities. Not to mention a good bit of history and queer Whitney Houston. This is a novel that deserves a movie deal, honestly.

I see where Petrus is going with this book, why she wrote it,
and who she wrote it for. It deserves everything and then some. Also, the book includes a playlist of songs at the end (that I desperately wished I knew about beforehand) and discussion questions. A true masterpiece and adventure for anyone
who reads it.

Or through Amazon here.