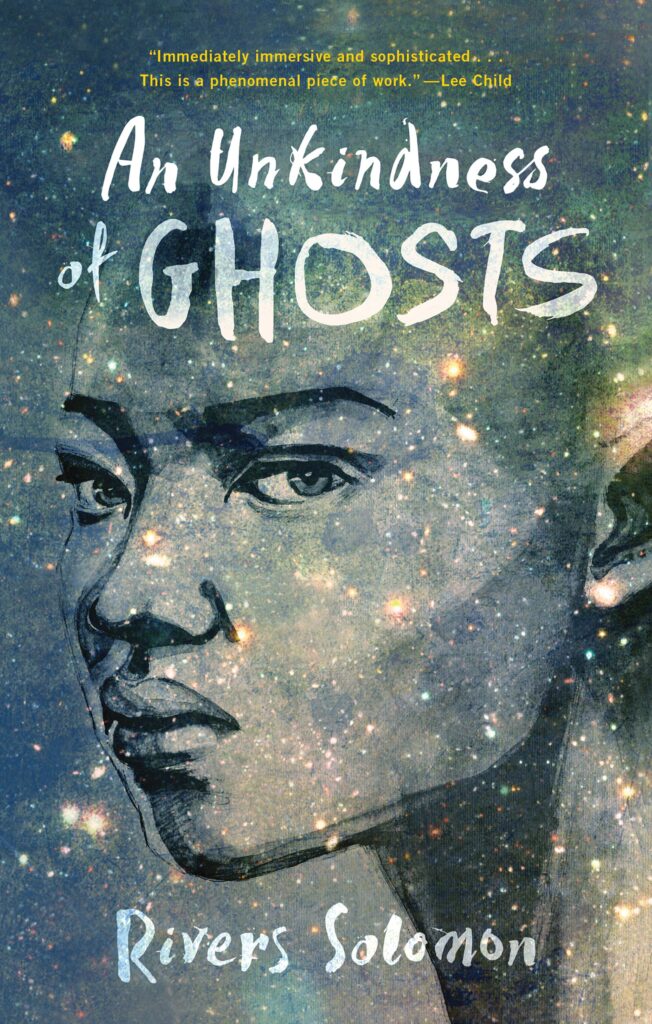 Aster has little to offer folks in the way of rebuttal when they call her ogre and freak. She’s used to the names; she only wishes there was more truth to them. If she were truly a monster, she’d be powerful enough to tear down the walls around her until nothing remains of her world.

Aster lives in the lowdeck slums of the HSS Matilda, a space vessel organized much like the antebellum South. For generations, Matilda has ferried the last of humanity to a mythical Promised Land. On its way, the ship’s leaders have imposed harsh moral restrictions and deep indignities on dark-skinned sharecroppers like Aster. Embroiled in a grudge with a brutal overseer, Aster learns there may be a way to improve her lot–if she’s willing to sow the seeds of civil war.

An Unkindness of Ghosts, written by Rivers Solomon, was my first Sci-Fi read of 2021 and holy shit, it did not disappoint! I feel
like I’m years behind (I am, it was published in 2017) but this is a book I haven’t heard much about in the LGBTQ+ niche. Despite  the fact, I’m so glad I finally read it, even though it took me significantly longer than my other reads. I just didn’t want to miss a thing, and I wanted to make sure I absorbed every word this novel had to offer.

Even though this book has multiple POVs, Aster is pretty
much our MC. A neurodivergent, black, gender-ambiguous powerhouse that not only was a joy to read through but taught me a lot about how other neurodivergent people may think and see and experience the world around them.

Aster was orphaned as a child due to their mother’s early death, and is living live on a ship called Matilda, that resembles life
on a plantation, but in space. Separated into lower and upper-decks, the black and brown characters like Aster live on the lower decks, who work to maintain the upper-decks, where the white and fair-skinned people hoard wealth, resources, and knowledge. Their Sovereign, which is similar to a mix of a
president/pope/authoritarian dictator, also demonize lower-deckers by blaming them and their “sins” for the long years Matlida has remained in space in search of the “Promised Land”. I don’t want to give to much away, but you get the picture.

Aster struggles to decipher their mother’s journals, where there seem to be answers on how to escape Matilda and find The Great Lifehouse, or what we know as Earth. Aster takes us on a rebellious journey filled with many obstacles and setbacks, and by the time I finished it, I was ready to pick it back up and start over again. The book doesn’t have a whole lot of romance, which in my opinion is fine considering it is a sci-fi fantasy novel.
I find a lot of mainstream fantasy puts too much emphasis on romance in the middle of a crisis, which makes it almost unrealistic, but I appreciate the way Solomon wrote the relationships in this book. Especially when Aster seems to
find attraction to men and women but doesn’t find much importance in gender at all, much less romance.

Solomon possesses great literary talent, and their multiple
POV voices are so distinct and unique. Although, I must warn, this isn’t a happy book. Of course, most dystopian novels aren’t, but this book had me feeling so angry and broken at certain parts, which is why it may have taken me longer to finish. There is a lot to dissect and experience, and although it was written miraculously, it didn’t feel good to witness.

With that being said, I will read this book again and again,
because although it’s not a feel-good book, it’s certainly a book that makes me think and ache and learn and cry.

An Unkindness of Ghosts was Rivers Solomon’s debut novel,
but I will definitely be reading the rest of their works.